Could you introduce yourself in a few words?

I graduated in 2016, having started my degree at the Lille campus in 2010. I’ve lived in Bordeaux for a year and a half now and in that time, I have to say I’ve been getting involved with more and more projects that I’m really having fun with!
Initially I arrived here with my drone pilot cap on, an activity that I quietly put to one side to focus on new projects that have a lot more meaning for me.
In February, I created the Pompon podcast, in which I interview entrepreneurs from Bordeaux and the surrounding region. They are business leaders, sportsmen and artists who are creating things, forging ahead and full of ideas and I wanted to share their stories with as many people as possible to show that you can be an entrepreneur whatever your sector - and most importantly you can be a success!
I also train people in public speaking. I support entrepreneurs and employees so they can be as comfortable as possible when speaking, whether in front of an audience, in a meeting or behind their computer screen in a video call. I find that too many people don’t pay enough attention to this skill when this is what people remember the most from such exchanges. 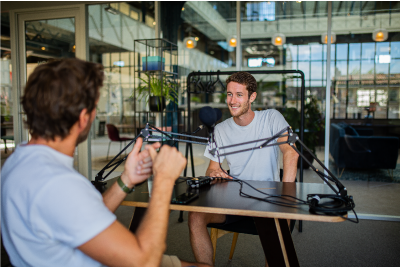 How did you come up with the idea of being a trainer?

It’s something I’ve been interested in for several years. I had to give the graduation speech for the students in my year and I have very mixed memories of it! I was extremely stressed, insufficiently prepared, my mouth was dry, I didn’t look at the audience, I needed to do a lot of work to adapt to the live audience… basically, not a great memory!
The trigger was about a year ago, seeing pitches from start-ups who wanted to raise their profile, but who spoke so badly, hardly anyone was paying attention … at any rate I was no longer listening and I thought, it's a shame, these people just need a bit more work to hold their audience.
I get a real buzz from helping people to become more comfortable speaking in public so that what they are saying makes as much impact as the way they say it!

What does the training consist of?

It’s two days of training where we address all the key points for a successful speech. We work on pitch, posture, body language, intonation, gaze, stress ... I could go on!
That’s what I want to do - to give other people tips and methods, so that they are more comfortable speaking and so that something which has been a huge fear becomes a real pleasure. And the great thing is that it’s possible!

What’s next for you?

I want to train as many people as possible in public speaking! The voice and non-verbal communication are two fabulous tools and I love helping people to master them. Alongside that, of course, I want to make a successful season 2 of Pompon, and work on the various projects linked to Pompon (a blog, extra episodes, an event etc.).
The IÉSEG Network's Entrepreneurs Club has also been relaunched and I hope that has a very bright future! There are so many of us doing things but we don't know each other well enough. The idea is to get to know one another, to work together if we can and above all to promote entrepreneurship among current IÉSEG students!